Kids stories to educate! .. Short funny bedtime stories for kids and picture story for kids to teach ideals. Excellent resource for mom and dad and teachers.

1) The Hare And The Tortoise

Tired of the bragging of a speedy hare, a tortoise challenges it to a race. The overconfident hare accepts the competition and runs as fast as it can after the race begins. Soon it gets tired and decides to rest, thinking that there’s plenty of time to relax before tortoise can catch up with it. Meanwhile, the tortoise continues to walk slowly, until it reaches the finish line. The overslept hare wakes up, only to be shocked that a slow moving tortoise beat it in the race. 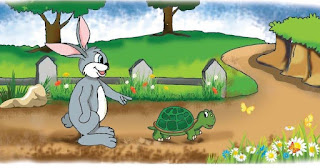 One day, two goats try to cross a weak and narrow bridge across the river. The goats are at either end of the bridge, but neither is ready to make way for the other. They come to the centre of the bridge and begin fighting about who should cross first. As they fight mindlessly, the bridge gives in, taking both the goats down into the river with it. 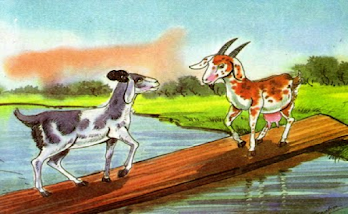 This is another interesting animal story for kids that brings a valuable moral lesson to motivate them. Enjoy it now! One day, a strong and powerful hound was chasing a hare. After running for a long time, the tired hound gives up the hunt. A herd of goats watching this mocks the hound, saying that the little one is better than the beast. To this, the hound responds: “The rabbit was running for its life, I was only running for dinner. That is the difference between us.” 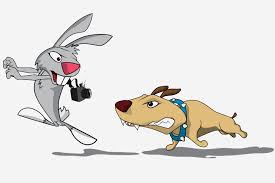 A farmer had a duck, which laid ten eggs. Soon, they all hatched. Of the ten, nine ducklings looked like the mom. The tenth one was big, gray and ugly. All the other ducklings made fun of the ugly one. Unhappy in the farm, the poor duckling ran away to a river nearby. There he sees white, beautiful swans. Afraid and lost, he wanted to drown in the river. But when he looked at his reflection in the river, he realized that he was not an ugly duckling, but a beautiful swan! 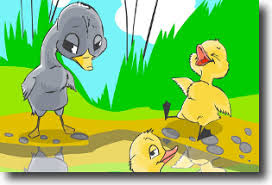 There was once a fisherman whose livelihood depended on his catch. One day, he was able to catch only one small fish. The fish, in its desperation to live, says “Please leave me kind sir. I am small and of no use to you. Let me back into the river and I can grow bigger. You can then catch me and make more money.” The wise fisherman replies, “ I will not give up a certain profit for one that doesn’t exist yet.” 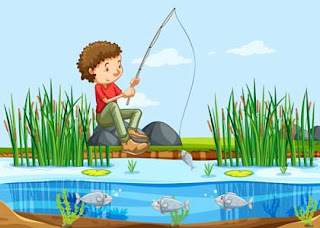 Walking alone in the forest, an unlucky fox falls into a well one day. Unable to get out, he waits for help. A passing goat sees the fox and asks him why he is in the well. The cunning fox responds, “there is going to be a great drought, and I am here to make sure I have water.” The gullible goat believes this and jumps into the well. The fox swiftly jumps on the goat and uses its horns to reach the top, leaving the goat in the well. 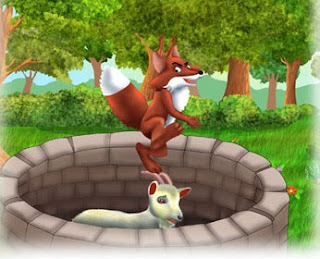 Moral of the Story:-  Never trust the advice of a man in difficulties.

7) The Lion And The Boar

It was a hot summer day. A lion and a boar reach a small water body for a drink. They begin arguing and fighting about who should drink first. After a while, they are tired and stop for breath, when they notice vultures above. Soon they realize that the vultures are waiting for one or both of them to fall, to feast on them. The lion and the boar then decide that it was best to make up and be friends than fight and become food for vultures. They drink the water together and go their ways after. 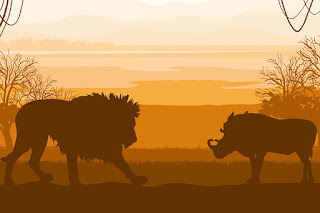